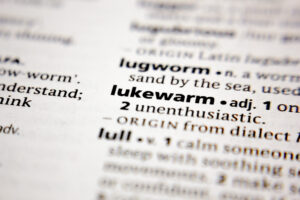 When something is going on in our lives, we tend to lose the intensity we had at the beginning. Sometimes we are satisfied with the fact that we had intensity in the past even if we don’t have enough of it now. We may regret, however, when we do not get the result that we think we will because of the insufficiency of the intensity. A loss of intensity can lead to an erroneous attitude that Jesus termed “lukewarmness.” This happened in the early church at Laodicea, and the Lord warned that church sternly, saying, “because you are lukewarm, and neither hot nor cold, I will spit you out of my mouth” (Revelation 3:15-16). He then urged them to “be zealous and repent” (3:19).

What this tells us is that losing a proper intensity can happen corporately. In other words, a majority of a group can develop a lukewarm attitude, and the atmosphere or spirit of the majority inspires the whole group not to acknowledge the error of their attitude.

A more serious problem occurs when there is lukewarmness over a spiritual matter. If a congregation is lukewarm about sin, it may not be a church of the Lord any longer because it doesn’t acknowledge the sin as a sin. As a result, they live with the sin without repenting of the sin. Not only that, they promote the sin, directly or indirectly, in their church and in the community around them by practicing and teaching it. However, the biggest problem for this group is that they don’t feel guilt, and so, when someone tells them the truth about their sin, they may persecute him instead of listening to him.

Such lukewarmness may happen in any group of God’s people. We can find one example after another in the Old Testament. In Noah’s day, for instance, all but the eight who were saved in the ark were guilty of the error (1 Peter 3:20). Except for Lot’s family, the citizens of Sodom and Gomorrah lacked any feelings of guilt for their immoral and sinful sexual practices (Genesis 19:4-5). The Israelites, who were liberated by God from the slavery in Egypt, didn’t feel any guilt for making a golden calf and worshipping it (Exodus 32:7-8). Additionally, the Israelites were so rebellious throughout history that God had to use Gentile powers to get them to repent (Nehemiah 9:26-30). Their lukewarmness was at its peak right before the dawn of the New Testament (Luke 11:46-52), and it resulted in the Jews corporately killing Jesus, the Son of God who came to tell them the truth.

We also should be careful not to develop a lukewarm attitude and thereby become sinners and the spreaders of the sin, neither corporately nor individually. For this reason, we have to be always sober-minded and screen ourselves with the truth every day. No one should regard himself or herself as immune to any sin. Rather, as members of the Lord’s church, we have to intensely fight against sin just as Jesus told us to. Jesus instructed us to be willing to gouge out our eye or cut off our hand to prevent sin (Matthew 5:29-30). Certainly, He was speaking hyperbolically, but His words indicate how serious we should be about fighting sin (cf. Hebrews 12:4).

Another important thing that we have to remember, individually and corporately, is that self-righteousness and complacency prowl around us like a roaring lion to snatch prey. To the self-righteous and complacent, faith is easy and light to carry. Jesus never said living by faith was easy nor would it become easier as one gets older. He clearly said only those who “endure to the end shall be saved” (Mark 13:13). He required His disciples to maintain such intensity, without allowing lukewarmness to creep into their faith. He said, “Whoever finds his life will lose it, and whoever loses his life for my name’s sake will find it” (Matthew 10:39). He presented faith as such a serious thing that we should risk our physical life to keep it. So does He to us too. Therefore, He may be asking us every day when it comes to our faith and our fight against sin, saying, “Are you serious?”